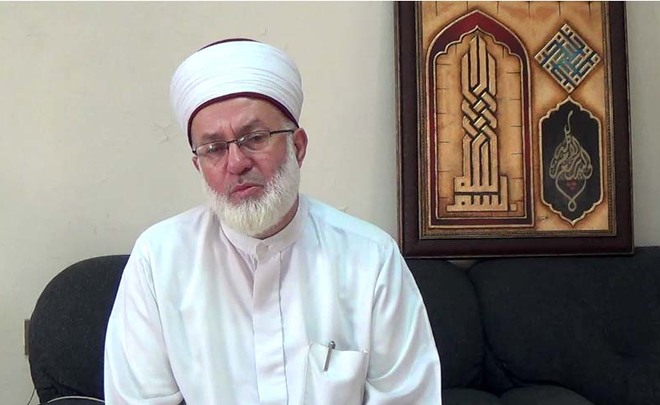 Celebrated religious and political activist Sheikh Abdul Nasser Al-Jabri ( on poster) passed away at the end of December in Lebanon. The man who supported a dialogue of religions was respected by not only Sunnis but also Shias (including Hezbollah). Columnist of Realnoe Vremya Anhar Kochneva, who is living in Near East, personally knew the theologian. But she could not visit the obsequies. In her column written for our online newspaper, she tells who came to say goodbye to the sheikh and publishes a piece of a personal talk with this person for the first time.

''Lebanon is a small country. Many people know each other personally''

It is difficult to write about a death of people whom you know personally. It is more difficult to do it if we are speaking about celebrated people whom many people love. It was the case of famous in many Near Eastern countries Lebanese social and religious activist Sheikh Abdul Nasser Al-Jabri who died at the end of December. The deceased was born in 1958 in Beirut. He studied in Beirut, Mecca and Damascus, he loved the latter much. This is why he took what happened in Syria in the last years to heart. He did PhD in Karachi in 1999.

The deceased' relatives accepted condolences during two days. During that time, the Islamic college near the Kuwait Embassy in Beirut that Abdul Nasser Al-Jabri headed was visited by thousands of people. Groups of people including from other countries came to express their condolences: religious delegations from Iraq, Syria, Palestine and other states. Christians, Druzes and Shias came to pay tribute to the Sunni sheikh. Lebanon is a small country. Many people know each other personally. The majority of the visitors of the event knew the deceased a long time ago. People took the floor one by one and told who Sheikh Abdul Nasser Al-Jabri was for them and for the Islamic world in general. 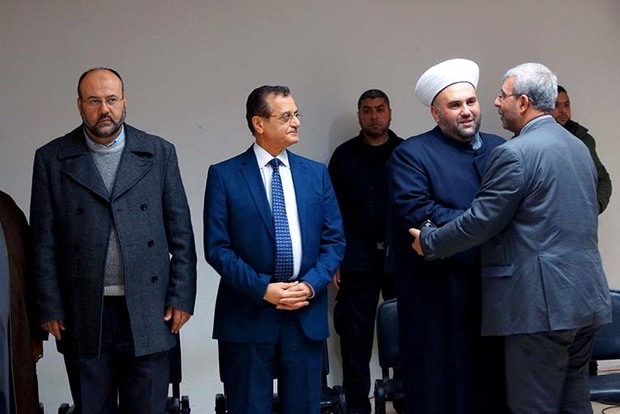 ''His destination was to help to unite people''

Director of Damascus Directorate of Awqaf Ahmad Samer Al-Qabbani who came from Damascus said the following:

''Today I was told what Lebanon lost after Sheikh Abdul Nasser Al-Jabri's death. Not only Lebanon lost him, Syria is also in mourning. On the one hand, it is a huge, noticeable loss among Islamic scientists and theologians, on the other hand, we lost a person who paid much attention to the education of members of the Muslim ummah and did his best to deliver the authentic spirit of Islam to Muslims. Today many people are trying imagining Islam as a religion of aggression, not a religion of wisdom, by kindling hatred in hearts of Muslims, including towards each other. At his college, he tried bringing up new generations of theologians who would be able to oppose attempts to spoil Islam. We think he was not only Lebanese but also one of the greatest scientists and theologians of Syria.''

As former Minister of Foreign Affairs of Lebanon Adnan Mansur who visited the obsequies told in a talk to me, the death of such a great scientist is a huge and unredeemable loss, of course. According to the ex-minister, Jabri's destination was to show peace loving and wisdom that are characteristics of Islam. His destination was to help to unite people of different religions and religious movements. He was a messenger of love and kindness.

''Let God be kind towards our dear deceased friend — great theologian Sheikh Abdul Nasser Al-Jabri. Undoubtedly, all people who knew, respected and loved him will remember him...'' Mansur added. 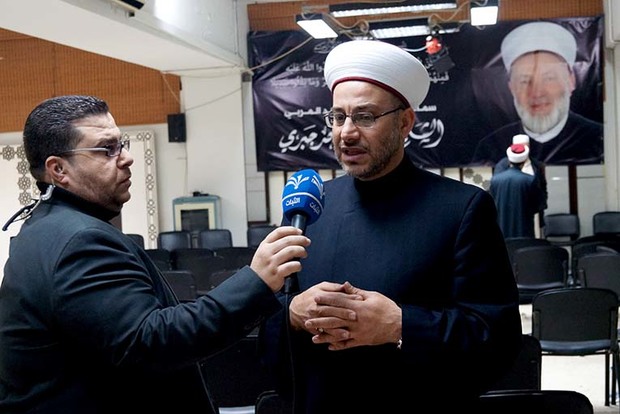 Abdul Nasser Al-Jabri's ancestors came from Arab tribes of the Arabian peninsula and participated in trips of the first Muslims to Persia, Iraq, Egypt and Syrian and Palestinian region. That family traditionally had many Muslim scientists and theologians. The deceased's grandfather was a famous merchant. The family had two homes, so to speak: in Beirut and Damascus (at the moment both cities were in one country). In 1982, he became one of the organisers of the Union of Muslim Scientists.

Jabri was the rector of Al-Dawa Islamic College (visiting) where many young Muslim scientists graduated from. He was the head of tens of charity organisations. He played an important role in the opposition (especially near Saida city) during the Israeli occupation of the south of Lebanon. 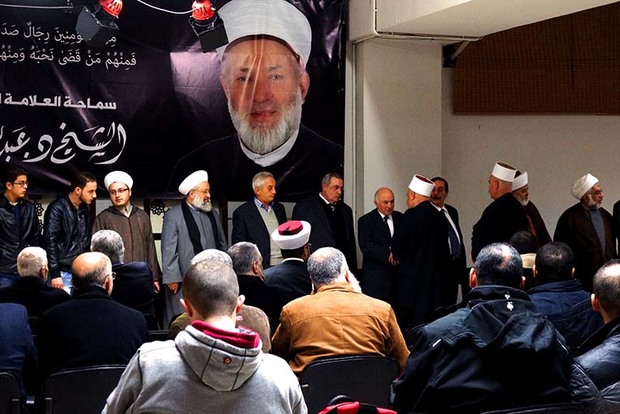 Condolenes of representatives of the Druze spirituality

''… I acquainted with Sheikh Abdul Nasser Al-Jabri two years ago thanks to my friends from the Waqf Ministry of Syria. Every time I visited him at college, he was surrounded by people. They were numerous students (including many foreigners) and people who needed advice, help, had their own projects and ideas. He made the time and found strength for everybody. Despite quite an old age (58 years), Sheikh Abdul Nasser Al-Jabri headed not only the Islamic college in Beirut he founded but Ummah Islamic movement. He chaired a small TV channel, gave interviews, participated in international conferences and was a member of a council that united different Islamic movements.''

Sheikh Abdul Nasser Al-Jabri was massively chased by those people who benefited from the disagreement of Muslims and the opposition (that becomes bloody at times) between different movements of one and the same religion because of constant attempts to arrange an inter-Islamic dialogue. People who used an ancient principle divide et impera [Editor's Note: divide and rule from Latin] desperately hated the peaceful and well educated Muslim scientist who easily defeated bigots in debates. The sheikh's relatives say that the rabid chase considerably worsened his state and probably approached his death. 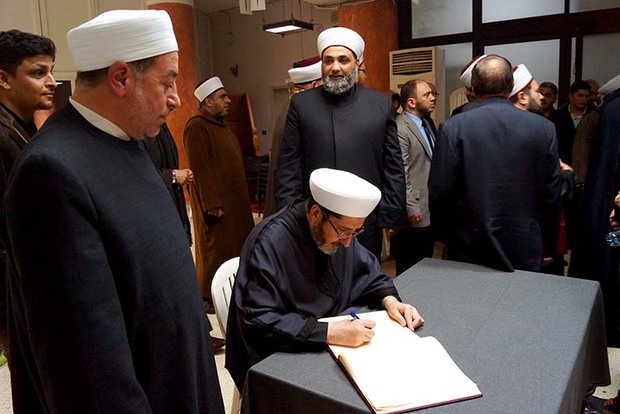 Not a long time before his death, I interviewed the sheikh about what was happening in the countries of the region, the attitude of Islam to that evil deeds done by terrorists who were using it to cover themselves. It turned out I am publishing that comment only now. Let it be a call for prudence of a person who aspired for peace till his dying day.

''In kind and mercy God's name.

Those horrible actions done today with criminal and destroying purposes by the name of the religion or Islam have nothing to do with real Islam. Because real Islam allows self-sacrifice to kill somebody only if it is a battle against an enemy at war. However, such actions are not allowed against civilians. Today we are seeing manipulations with these concepts. They are trying to substitute one thing for another in order to disorientate and deceive the majority of Muslims. It is happening in Syria, Iraq, Lebanon, Turkey, and it started in European countries.

Muslim theologians paid attention to this problem many times and urged to awareness and union. For his reason, they themselves became a target for bigots — today they are kidnapped, shot and exploded. Bigots don't need peace, blossom, other things are their goal. Chaos is one of these goals. It is what was called manageable chaos in politics. The absence of stability leads to factions and quarrels and decreases chances of uniting people for the sake of blossom. We need to put effort to avoid the young being influenced by those people who have such an ideology. Such an ideology is far for principles of the Islamic law and is not acceptable before the Most High.''