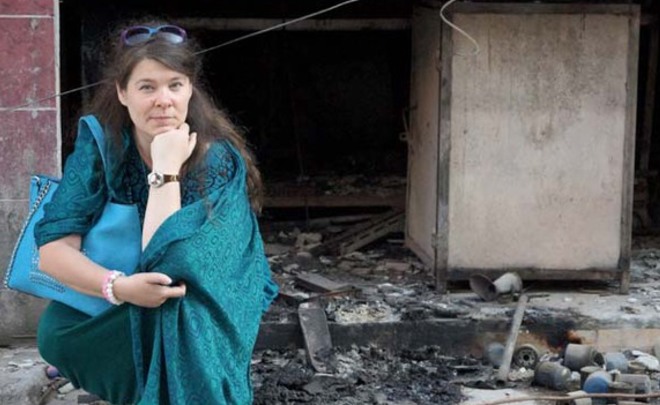 The special operation to liberate east Aleppo from insurgents in Syria is continuing. As Realnoe Vremya reported, the presence of Russian naval battle group on the coast of the city forced the rebels to start armistice talks. A columnist of our newspaper Anhar Kochneva in her new column continues to acquaint our readers with the situation in Syria, and her today's column is about the enclave of Aleppo, which is still controlled by the terrorists. In her article, she draws an analogy with other previously liberated Syrian cities of Homs and Adra.

One of the main expected events of the last weeks was to be a withdrawal of the militants and of the civilians remaining in the occupied enclave from east Aleppo. However, this event did not take place. Instead of expected hundreds of thousands only several dozen people have left the bandits enclave. What are the reasons why a 'blitzkrieg' for the liberation of Aleppo failed?

In February 2014, I witnessed such evacuation from the central city of Homs. Due to agreements through this February action, more than 1,000 people left the blockaded for several years enclave. It was civilians, who like their brethren in misfortune were a human shield for militants, and several participants of illegal armed groups who wished to lay down their arms, to be checked for involvement in killings of fellow citizens and to take advantage of the declared by the President of Syria amnesty if there are no bloody crimes behind them.

On the first day, despite all efforts and ongoing talks with the leaders of the insurgents nobody appeared. Only late in the evening, just before nightfall, the vehicles of the Red Crescent (similar to the Red Cross in the Muslim countries), loaded with food and medicines, and the representatives of the UN could enter the blockaded enclave. The convoy was fired by someone from the militants-provocateurs. Fortunately, there were no human victims. In such circumstances, they decided not to evacuate people that day, although the first group of 26 people were ready to leave the unsafe area. They decided not to risk especially because of the fear that most irreconcilable militants would try to use the humanitarian convoy and the cover of night, breaking all the agreements, and will try to break through to the waiting for the release of civilians security officials and journalists. 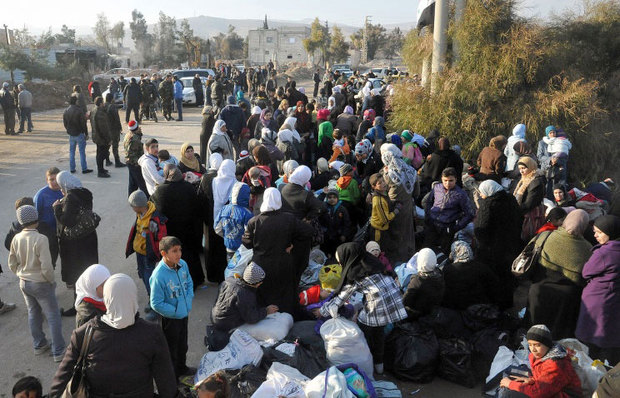 The next day (February 9), the evacuation started. That day, by the inhuman efforts the representatives of humanitarian organisations managed to 'pull out' 611 people. They were evacuated not only by buses provided by the Syrian government but also by literally everything that could be driven. The exhausted were carried in the arms to the ambulances, in wheelchairs. Starving people were given special food rations so they could eat before they left the blockaded enclave and got to a building where there was organised a census of those who managed to evacuate. Over the next three days, the lives of other hundreds of people were saved, most of whom were children. Of course, many of the rescued were relatives (including, close ones) of the militants, due to whom these people had to suffer hardships of the siege. However, it is the essence of the developing in Syria national reconciliation process: anyone who realises that once they chose the wrong side, they can get forgiveness in one way or another and a chance to return to a normal civilian life. Especially if they personally did not participate in the executions, murders and terrorist attacks.

People, who for almost 2 years have been on the territory of 'freedom fighters', being on the other side of the fence suddenly realised that were not only in the blockaded enclave but also in the captivity of the imposed by anti-government TV channels propaganda of myths. There was a peaceful life outside of the enclave. All the past two years, children went to school, young people — to universities. Adults — to work. People received salaries, played the weddings, traveled to other towns and to the sea, buried the dead and deceased loved ones humanly, were not hungry and did not longed for the overthrow of the 'bloody regime', although all sorts of 'al-Jazeera' assured the prisoners of the Enclave of Freedom in the opposite and in an imminent victory.

Most probably, the fact what relatives and close people of the fighters who remained in Old Homs saw by their own eyes how the rest of the country was living and assured in the futility of further being in the enclave, where there was no electricity, no food, no water, no medicine or entertainment, has played a decisive role in the fact that the militants eventually agreed to release completely this controlled area. Some people chose to give up and get a chance to get under the amnesty (basically, it is those who didn't kill people but performed functions of security guards etc.), while the others were taken by buses to the north-west of Homs, to his followers. In the end, a small piece of the third largest city in Syria (the size of the bandit enclave was approximately 1 to 1,5 km), which was for the city a real headache, came under the control of government forces. There began a restoration of damaged historic buildings, the refugees returned to their apartments and started repairing their houses. The cut in half city (before, in order to get in the neighbourhood, they often had to go around the city and even travel by the ring road) was again unified and convenient for people.

All the militants left the central areas of the long-suffering city on May 9, 2014. It is no exaggeration to say that Homs in 2012-2014 for militants had almost the same significance as now Aleppo for the anti-government forces. Homs was pretentiously called a 'rebellious city" (says nothing of the fact that most citizens simply ran far away from the uncontrolled 'rebels') and 'the cradle of the Syrian revolution'. However, the carried out by the government forces full blockade of Old Homs and the lack of dominance of the most extremist groups such as Nusra and ISIS (both organizations are banned in Russia — editor's note) in the end made the negotiations and subsequent successful purge of this part of the city from anti-government forces possible. The process of the situation resolving in Old Homs was not limited to those February and May days, when with the assistance of humanitarian organizations there was carried out the mass evacuation: civilians, as well as the militants, by small groups, left almost every day, gradually cooling the fear of those remaining ones, who may be wanted to surrender, but they feared reprisals at the exit of the enclave to the Syrian soldiers. This myth was strongly hammered into the heads of those wishing to escape from dangerous places and now in Aleppo: those, who managed to leave areas of active military operations, say that they had been intimidated with imminent death. 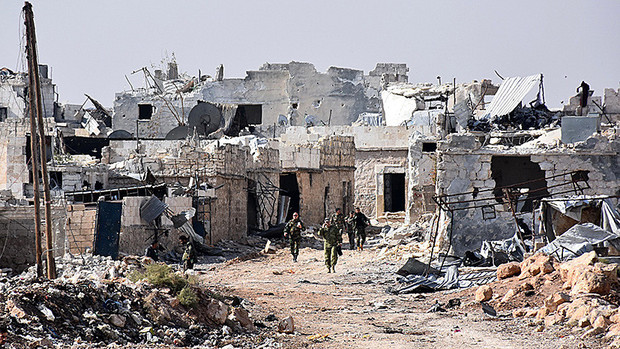 A chance to save yourself and your families

The situation in Aleppo is different now, not similar to what it was in the winter and spring of 2014 in the city of Homs. At least because only recently they have managed to take the captured by the insurgents area in a dense ring and to block it (the blockade of Old Homs lasted more than 2 years). But in spite of everything, periodically renewing truce has already made it possible to save several dozen lives. There are many difficulties. And the process of evacuation has been mostly stalled due to the fact that at a sufficiently close distance from east Aleppo there are much larger areas also controlled by the militants. The militant leaders give reasons for their reluctance to release parts of their 'human shield' by the imminent breakthrough of the blockade of these areas: wait, soon we will be saved and will be unblocked by other fighters, and the army you will just kill you. That is why — don't rock the boat.

The evacuation of all staying at the militant-controlled sector of Aleppo civilian population will inevitably lead to a revitalization of the Russian VKS and the Syrian air force in this area and will expand the scope of ground operations of pro-government forces. That is why an evacuation of civilians can be carried out only in the case if it is an evacuation from abandoned blocks of fighters themselves, among whom there are not many those willing to meet their doom. Militants with Syrian citizenship can give up and try to get under the amnesty in the framework of the evacuation. Or to move to another controlled by fighters enclave. Part of the militants agrees to these terms. For many of them, this is a real chance to save themselves and their families, to escape from war and to return to normal civilian life. But the presence in Aleppo of a large number of foreigners slows a negotiation process: unlike the Syrians, foreigners are not subjects to amnesty. Syrian fighters got involved in this war in order to change some officials to others. But the foreigners from all sorts ISIS came to Syria to destroy the country itself. If it is possible to reach agreements with the militants of Syrian origin, with the foreigners — it is impossible: it is not their fellow citizens and relatives are being killed in the fighting, not their historical heritage is being destroyed as a result of explosions and attacks. Everything around is not their, not native and not having in the eyes of foreign bandits any value.

The residents from the captured by the insurgents areas of Aleppo have become hostages of those who promised to bring them freedom. Freedom is promised, but they are not allowed to control their life and be free to travel wherever their heart wants. Today most of the survivors already had to pay a hefty by local standards money for the opportunity to leave this 'territory of freedom'. But what about those who have no such money? 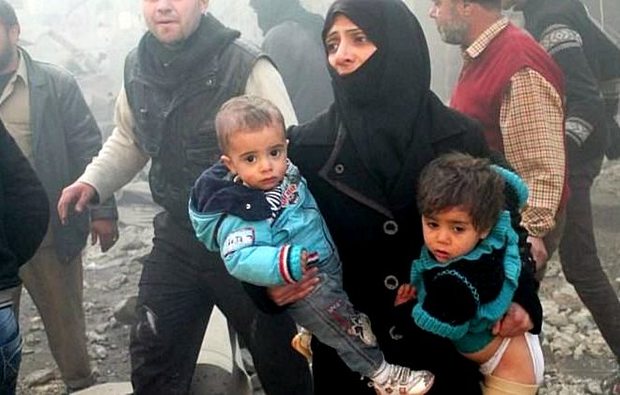 In 2014, when the militants captured the town of Adra in the desert near Damascus, the riots of the militants outraged in the city. Its inhabitants also became hostages. Many people were brutally killed (they say that living people were burned in huge ovens of local bakeries, others were beheaded or shot from rifles). But a part of the residents of Adra, gathered in a large crowd, once headed out of town, telling the bandits that they did not intend to remain in their homes. People desperately wanted to escape. And they did it: brave people really were able to escape and were not killed by militants, there were too many of them. Perhaps, such demarche could save a large part of remaining in Aleppo civilians. But only if they finally united together and expressed their opinions. While only a few are trying to resist attempts by insurgents to keep them as 'human shields'. And the bandits just kill brave individuals…

Many people today suggests that the situation in the occupied enclave in Aleppo just 'has not ripened yet'. The rebels still hope to break the blockade, for help from outside. They find arguments to intimidate the population of imaginary massacres by Syrian soldiers to leaving the enclave civilians. Perhaps, in the occupied enclave civilians, apparently, have not reached yet the extreme degree of despair, which pervaded Old Homs in the spring of 2014 and pushed the mass manifestation of protest of the inhabitants of the town of Adra, feared by executions under their windows. That's why so empty are all eight provided by the centre for conciliation humanitarian corridors. The failed attempts to cut Aleppo node in one fell swoop over several days have shown that we must continue to work on the situation.